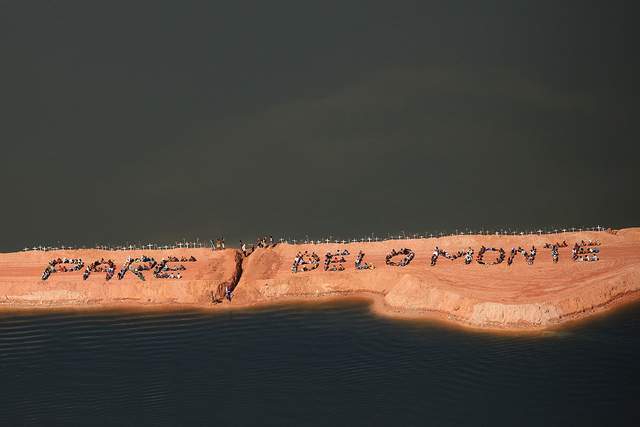 Three hundred indigenous people, small farmers, fishermen and residents take over the site where the Belo Monte hydroelectic plant is under construction and line up to form the phrase: “Stop Belo Monte” so as to warn the international community about the impacts of the project. (Photo: Atossa Soltani/ Amazon Watch / Spectral Q)

The fight continues between the Brazilian government pushing to bring another hydroelectric dam to the Tapajós river basin in the Brazilian Amazon and the indigenous Munduruku people who live there.

In the states of Mato Grosso do Sul and Pará, where many indigenous people live, there are 11 hydroelectric plants in different stages of construction and licensing, including the controversial Belo Monte dam. Other areas in the region are undergoing environmental surveys to plan future development. The dams are being built to feed much-needed power to the country as it undergoes tremendous economic growth.

But indigenous people in the area complain they have not been consulted on these projects and construction is snatching away and destroying their sacred homelands.

Angry and disenfranchised, the Munduruku and other indigenous people have undertaken a campaign of resistance against the government's initiatives. From the time construction on the Belo Monte hydroelectric dam started in June 2011, there have been 92 interruptions due to indigenous protests.

The latest demonstrations have escalated the already tense atmosphere surrounding the situation, beginning in May 2013 when indigenous people occupied the working site of the Belo Monte hydroelectric dam for three days.

Then in the beginning of June 2013, 144 Munduruku individuals occupied the building of the Fundação Nacional do Índio in the federal capital of Brazil and seat of the government, Brasília, to demand the halting of construction on the Belo Monte and other hydroelectric initiatives in the Tapajós River Basin in the States of Pará and Mato Grosso.

The indigenous people were received by the Minister of the General Secretariat of the Presidency, Gilberto Carvalho, who reaffirmed that the dam development will continue but promised the Munduruku more agility in the demarcation of indigenous lands as well as compensation in the form of health and education assistance.

At the same time, the Munduruku signed a letter in protest against the construction of the Teles Pires hydroelectric dam, responsible for blowing up waterfalls which are considered by the Munduruku people as sacred symbols.

On June 21, 2013, the group kidnapped three biologists while they were carrying out environmental studies in the area for dam construction. Two days later, the government met with the Munduruku, who released the biologists in exchange for a promise that further environmental surveys for future development in the area of the Tapajós River, where 12,000 Munduruku people live, would be halted.

In a public announcement, the indigenous people stated that they will not tolerate the government's attitude as far as building further dams within indigenous land. The researchers were released peacefully, but National Force agents have been sent to the region. In response to the outcome of the action, the indigenous people stated in the document: We hope that the soldiers have not come here so as to attack us, but to defend our right for the land, the law and the Constitution.

In a statement issued by the public prosecutors of the two affected states on June 4, 2013, the agencies stressed that the traditional and indigenous communities should be consulted about the hydroelectric projects, as required by the Indigenous and Tribal Peoples Convention 169 from the International Labour Organization (ILO), of which Brazil is a signatory.

The public prosecutor, Ubiratan Cazetta, explained: Such actions must be preceded by public hearings involving the populations affected, or else Brazil will be disrupting its commitment to the Convention 169.

Emerson Kalif Siqueira, the public prosecutor for the state of Mato Grosso do Sul, has stated: There is a lack of political will to solve the conflict.

The Brazilian government is facing three lawsuits filed in defense of the rights of the Arara, Juruna, and Munduruku indigenous peoples as well as the traditional riverside populations affected by the development. According to the court, there are about 17 ongoing lawsuits that concern the Belo Monte hydroelectric plant, a legal battle that has been going on for a full seven years.

The government has sought support from the country's judiciary to make legal its operation sending the National Force to the region to protect the environmental impact studies carried out, according to the public prosecutors for the states of Pará and Mato Grosso. This fact in part feeds the Munduruku people's rebellion.

The indigenous leader Valdeni Munduruku raised the following question in the aftermath of the meeting with Minister of the General Secretariat of the Presidency, Gilberto Carvalho, in early June:

This place here (Palácio do Planalto) [federal government headquarters] is not our house. Our house is the indigenous village, that we want to protect from the government plants, which behaves like our enemy. If it were our house, there would not be this type of project coming out of here.

The co-founder of Portal Imazon, Beto Verissimo (‏@betoverissimo), laid out different scenarios that could play out: We shall see whether there will be a change in the approach of the government when it comes to issues such as the hydroelectrics in the Amazon. Will there be debate with society at large (…) Or the government will maintain its attitude of shoving their decisions down our throats? Will they, finally, listen to the indigenous peoples, to science and to those who criticize the mega hydroelectric projects…

Indigenist Helena Palm (‏@helenapalm) also gave her opinion on Twitter: Jacareacanga [municipality in the state of Pará]: the Munduruku people want a public commitment on the part of the government that studies for plants will be halted while there is no consultation.

The interactions between the government and the country's indigenous have turned more violent. Recently, on May 30, an indigenous man, Oziel Terena, was killed in a conflict with the police during the eviction of the Buriti farm, in the district of Sidrolândia, in the state of Mato Grosso do Sul. The indigenous occupied the farm on May 15, though they have been struggling for the land for 13 years. The Ministry of Justice declared the 17,200 hectares area where the Buriti farm seats as traditional territory of the Terena People back in 2010. Soon after May's occupation in protest, the court issued an order of repossession of the farm, owned by the former state MP Ricardo Bacha.

The authorities have shown inability in dealing with the conflict and the indigenous people have suffered racist attacks from the media and on the part of the Federal Police. The Justice Minister recognised the mistake in the way the police agents handled the case that lead to the deaths and reaffirmed that the indigenous people had not been the target of the Security Force, which had been present in the area in order to safeguard the interests of all those involved.

The Conselho Indigenista Missionário (Cimi), an organization that stands in favor of the indigenous questions, states that over the last decade, 560 indigenous individuals were murdered in Brazil and reflects that there is the common belief, shared in the popular imaginary, that the indigenous people are responsible for detaining the progress and development of the country in the way of agrobusiness supported by the public authorities.

The Federal Public Prosecutor believes that the lack of land demarcation and the mistaken land titling carried out by government administration have extended the judicial problem and have increased violence and that the solution, therefore, rests on an increased agility in the demarcation of the indigenous lands.