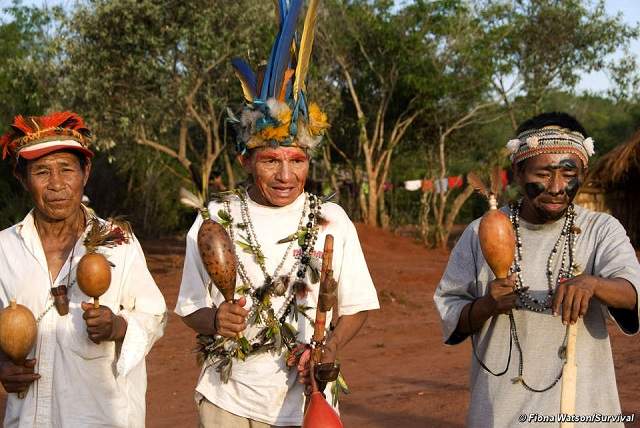 Three Guarani Indian communities in central Brazil have been given a glimmer of hope that they can remain on their ancestral lands, after legal rulings overturned or suspended orders to evict them.

The three communities in Mato Grosso do Sul state – Kurusu Mba, Passo Piraju and Pacurity – had reoccupied small parts of their ancestral territory after their lands were taken over by ranchers.

The Supreme Federal Court has now ruled that the Kurusu Mba community should not be evicted because the land could one day be declared indigenous. Four of the community’s leaders have been assassinated by gunmen since they reoccupied part of their ancestral land in 2007.

In a letter to Brazil’s President last October, the Kurusu Mba Guarani wrote, “We have been surviving and resisting here for 10 years and we are all going to resist until death. We’ve decided we’ll all die together and that we shall not leave or be evicted from our old land.”

Ranchers regularly employ private militias to patrol farms and use eviction orders to harass and intimidate the Indians.

The order to evict the Paso Piraju community was overturned in recognition of the fact that the area is under dispute; and a judge suspended the eviction order of Pacurity, citing the risk of conflict, and the lack of security and water if they were evicted.

Successive Brazilian governments have failed to resolve the severe land conflict in Mato Grosso do Sul. As a result of the large-scale loss of their land, the Guarani continue to suffer from malnutrition, violence, death threats, and one of the highest rates of suicide in the world.

A powerful farming lobby in Brazil’s Congress is pushing for a constitutional amendment (“PEC 215”) which would give Congress power to decide on the recognition of indigenous territories. PEC 215 would deal a major blow to the Guarani and other Indians’ struggle to regain their lands.