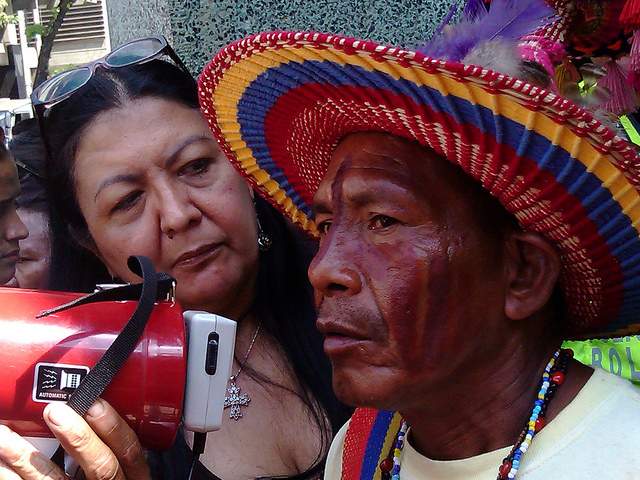 The Indigenous Peoples of the Amazon and across the Americas have centuries of experience facing deadly threats.

For over 500 years we have faced invasions, the loss of our ancestral lands, ethnic and socioeconomic discrimination that has led to displacement, illnesses, death, and the constant threat of cultural and physical extermination.

For decades, large companies and governments have offered us what they call “economic development” in exchange for the extraction of irreplaceable natural resources. In reality, those uncontrolled practices have enslaved us and contaminated our lands, in a habitat that is of vital importance not only for the Peoples who live together there but for the whole planet.

Our home, the Amazon, not only contributes significantly to the gross domestic product of many countries in the region but also contributes the largest quantity of oxygen to the world. However, the Peoples who protect it are deprived of fundamental rights such as basic services, education, and health.

One of the most recent examples of these abuses took place on 7 April. While the world was trying to understand how the novel coronavirus pandemic was changing life in cities, many Indigenous communities in the Ecuadorian Amazon were left without water following the collapse of the bases and pipelines of the Trans-Ecuadorian Pipeline System and Crude Oil Pipeline.

For decades, large companies and governments have offered us what they call “economic development” in exchange for the extraction of irreplaceable natural resources

The massive oil spill in the waters of the Coca river, located on the border between the Amazonian provinces of Napo and Sucumbíos, has clearly endangered the communities that live there and depend on it.

Without rivers to fish in, they have been left without their main source of food. Without water, surviving has become a daily battle.

The oil companies responsible for the spill have sent some food rations and bottled water, but neither they nor the government have agreed on long-term actions to guarantee the life and health of those who live in the area.

While the World Health Organization advises hand washing as the main prevention method in the face of the pandemic, the affected communities barely have a small amount of water to drink.

Ecuador’s experience is not unique.

The COVID-19 pandemic has now been added to the list of threats that the uncontrolled extractive activities of hydroelectric, oil, mining and timber companies represent.

In response to this new danger, governments in Latin America have replicated the same historic patterns when facing the problems of Indigenous Peoples: indifference, inaction, and imposition. In some cases where action has been taken, health policies that do not respect cultural diversity are developed and implemented, and specific budgets for care for Indigenous Peoples are not assigned.

But the Indigenous communities and organizations in the Amazon basin have not continued waiting for help that we know will never arrive.

In the first instance, we have called on governments and international organizations to take action and enter into dialogue through letters, declarations and data surveys to warn of the serious situation that the Indigenous Peoples are experiencing in the face of the alarming rise in contagion and deaths in the Amazon.

Communication channels with different national and local authorities have been developed in order to agree on joint management methods to guarantee that those who need it can access the care they need in a timely manner. However, our demands have not been listened to so far. For this reason and in accordance with our principles as Indigenous Peoples, we have developed our own care protocols, emergency and action plans taking into account the needs of each community.

In some cases, for example, we have organized among ourselves to limit and control entry to and exit from the communities, we have increased and expanded the use of ancestral medicine, created our own information and care campaigns, and we have put together specific help groups that coordinate the distribution of medicine and food to the most affected areas.

Faced with the lack of action by governments to address our needs, the Coordinator of Indigenous Organizations of the Amazon Basin (COICA) launched a campaign to raise emergency funds. The fund has the aim of collecting and channelling 100% of the resources to the Indigenous communities of the nine countries of the Amazon basin facing the COVID-19 emergency.

Decisions on grants and governance of the fund are carried out under the strict coordination and communication of a governing board that includes Indigenous leaders of COICA and its member organizations and, to a lesser extent, representatives of participating, donor and advising social organizations. All the money raised is completely and exclusively sent to the communities that need it most, by providing kits with food, medical supplies, and protection.

This fund will be a lifeline for many Indigenous communities, but it is not enough.

In the context of a pandemic that will probably last for some time, we need dialogue and action in order to develop and implement culturally appropriate health policies, with plans and budgets specifically aimed at care for Indigenous Peoples. If governments really want to take care of the guardians of the earth, this is the only possible way. It is no longer an option not to take action. If we do not act now, we will be witnesses to ethnocide.

While the Amazon is alive, humanity is safe.

This article was originally published by El País