After Indonesian paper giant commits to no deforestation, pressure mounts on its biggest competitor 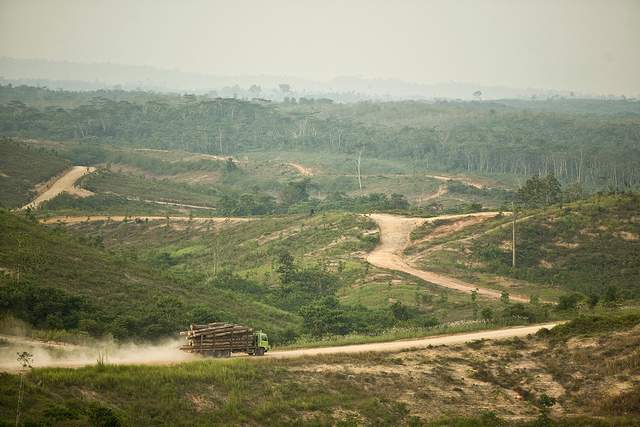 On Tuesday, WWF echoed Greenpeace's call for Asia Pacific Resources International Limited (APRIL) to eliminate deforestation from its supply chain. Like APP, APRIL has been linked to large-scale conversion of Sumatra's endangered rainforests for industrial tree plantations to produce pulp and paper. These plantations have taken a heavy toll on rare wildlife, including orangutans, tigers, elephants, and rhinos, while generating substantial greenhouse gas emissions from deforestation and draining of the island's carbon-dense peatlands.

“APRIL is now the single largest converter of natural forest among Indonesia’s pulp producers,” said Nazir Foead, Conservation Director of WWF-Indonesia, in a statement. “We urge the company to immediately change their unsustainable business model and stop draining our peat soils and converting our forests”.

“WWF calls on APRIL to stop pulping tropical forests, solve social conflicts and restore the forests and peatlands it has destroyed,” added Aditya Bayunanda, pulp and paper manager for WWF-Indonesia.

Analysis by Eyes on the Forest (EoF), a coalition of Sumatran environmental groups include WWF-Indonesia, shows that APRIL cleared at least 140,000 hectares (346,000) acres of tropical forest between 2008 and 2011, accounting for one-third of all forest loss in Riau Province during the period. WWF-Indonesia says that two-thirds of the concessions that supply APRIL in Riau are located on peatlands. 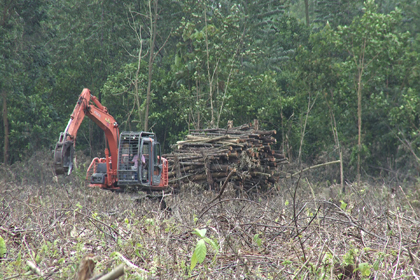 WWF's statement comes less than a week after similar demands from Greenpeace and the Rainforest Action Network (RAN), activist groups that helped lead the campaign to pressure APP to stop clearing native forests.

Greenpeace sent a letter to Sukanto Tanoto, the chairman of Royal Golden Eagle International, the conglomerate that owns APRIL, putting the company on notice that it would soon be targeted by campaigners if it doesn't clean up its operations. Meanwhile RAN, which has been running a campaign against APRIL since 2009, launched a new email protest via its web site.

APP's new forest conservation policy is potentially far-reaching, applying to all fiber that enters its supply chain, whether it comes from APP-owned concessions, affiliates, or independent suppliers. The commitment prohibits conversion of high carbon stock and high conservation value forest, the definition of which will be determined by outside auditors. APP has also pledged to address social conflicts the plague several of its concessions as well as embrace the concept of “Free, Prior Informed Consent” in engaging with communities on new plantation development. The policy could cost APP tens of millions of dollars in unwinding supplier contracts and forgoing conversion of forest already under concession. However the potential upside is also substantial. Pressure from environmental campaigners have cost APP tens of millions of dollars in lost business at a time when it is looking to raise significant amounts of capital to meet debt obligations and finance expansion. A similar agreement signed in 2011 by APP's sister company, Golden Agri Resources (GAR), enabled the palm oil giant to raise $400 million via a bond offering. Just two years earlier GAR had been facing widespread customer defections over its links to deforestation and peatlands destruction.

Still while APP's announcement has been widely lauded, not everyone is convinced the paper giant will follow through on the commitment. APP has failed to abide by prior pledges to phase out conversion of wildlife-rich forests. Nonetheless, for now Greenpeace has agreed to suspend its campaign against APP in hopes that its forest policy could lead others in the Indonesian forestry sector — most notably APRIL — to move toward greener practices. Such a shift in the private sector could create new momentum within Indonesian ministries to develop and implement policies that support law carbon development, including accelerating the process of setting aside conservation areas and offering incentives for plantation development on non-forested lands.