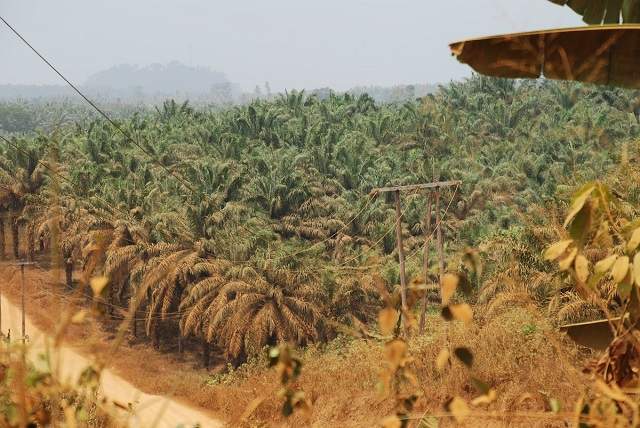 Local communities affected by a large-scale palm oil plantation took their case to the Court of First Instance in Bangem, south-west Cameroon, with the first hearing set for 9 November. Greenpeace Africa, who documented the abuse made by the company for the last seven years, launches a call in support for the communities.

This announcement follows two collective complaints involving 244 farmers which were filed against SG Sustainable Oils Cameroon (SGSOC) on 27 September for trespassing. Of those, 231 came from the village of Nguti, whose population demanded that SGSOC would respect a 5km buffer zone around theirits farmlands. However, the concession zone demarcated by SGSOC encroaches on many farms in the forest areas around Nguti, showing no respect for the buffer zone.

“How are we going to live if SGSOC takes our farms? How are we going to eat? I have no other means. I don’t want money, because who knows for how many years it will last? It won’t help my children and grandchildren, but my farm will, as I have crops every year,” said Susan Tah Agbo, who takes care of 24 people thanks to her 20 hectares (49 acres) of farmland.

In Babensi II, 13 farmers also went to court as their lands have been seized by SGSOC, without any consultation or prior agreement. “One day, I came to my farm and I found that they had bulldozed everything. I knew I was going to develop this place to earn my living and when I die, my children would remain there, but today, I have no place. We are all crying here, and we don’t know how we can be rescued”, said Adolf Ngbe Ebong, a 62-year-old retired policeman.

SGSOC, the Cameroonian company which holds a concession of approximately 20,000 hectares concession for palm oil plantation development, was  owned by the US-based company Herakles Farms until 2015. Since 2009, when the company settled in Cameroon, Greenpeace Africa and national and international NGOs have released numerous documents based on investigations into the many misdeeds of SGSOC.

“SGSOC activities are tainted with illegalities: not only does their establishment convention with the Cameroonian government violate the law, but they also cleared the forest without a permit, intimidated several traditional chiefs and used bribery and promises which are yet to be realised to obtain local authorities’ favour,” said Sylvie Djacbou, Greenpeace Africa forest campaigner.

The provisional land lease granted via a presidential decree in November 2013 to SGSOC expires this November. A coalition of several NGOs, of which Greenpeace is a part, launches today a petition in Cameroon and internationally, to ask the Cameroonian government not to extend nor to renew it.

“SGSOC violated the law many times and didn’t fulfill the numerous promises they made to the communities, such as the building of roads and schools, so one can’t think how they could improve. Cameroon needs development, but always while protecting local communities and the great biodiversity that surrounds them. SGSOC is a destructive project, located in between four protected areas, so it must end,” added Sylvie Djacbou.

The project site is located in the Guinean forest of West Africa Biodiversity Hotspot, which shelters 1,800 endemic species of vascular plants and an exceptional diversity of the world’s top species priorities for primate conservation.

1. Link to the Herakles Farms/SGSOC report.

2. Link to the petition.