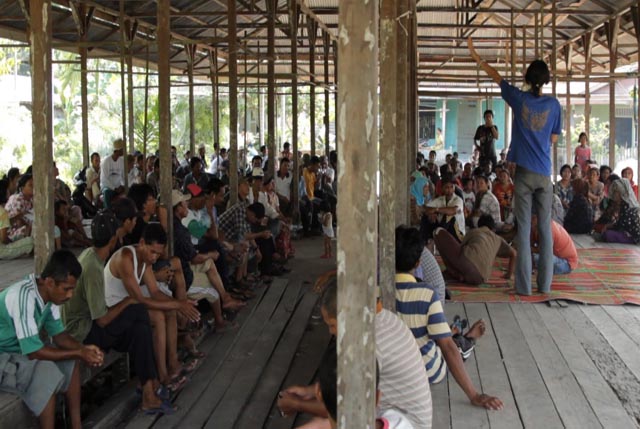 LifeMosaic has been operating since 2006. During this time, we have:

Produced over 40 videos for community empowerment and critical education.

Trained 1500+ ocal facilitators, movement-builders and community organisers in the use of media for critical education.

Trained 350+ indigenous youth, with the calling, critical awareness, skills and love of their culture to defend and look after their territories.

Supported hundreds of communities to take action to defend their territories and cultures including protecting over 130,000 hectares of their customary forests.

LifeMosaic is helping to share the Plan de Vida, or Life Plan, a powerful indigenous approach for self-determined development, leading to communities in Indonesia, Latin America, Africa and Scotland taking up the approach.

Our work helped catalyse the emergence of an indigenous education movement in Indonesia.

Our work has led to thousands of indigenous communities obtaining information relevant to their circumstances. Screenings and community discussions have led to countless community actions to defend and manage their territories, cultures and forests

We have worked with communities and movements in ways that draw on the strength, initiative and capacity of these communities, rather than creating dependence on LifeMosaic.

“This film is indeed an interesting example for us to carry out in the community.”
Momonus, village headman, Semunying Jaya, Borneo

Feedback on Behind the Page (Pulp and Paper project):

“What is being experienced by indigenous peoples in Indonesia is the same as what other indigenous communities are experiencing in the Philippines and in Ecuador, and what they are experiencing is also caused by large-scale industries […]. Watching these films gives us new learning to help ensure we make the right choices for our peoples.”
Pak Akon, Dayak Kualatn, West Kalimantan, Indonesia

“Now I know about the climate and also about indigenous peoples’ rights, so the companies and the government had better not come and lie to the people in my village anymore. I will watch the film ‘Fever’ with my community and when people know the content, we can declare whether we accept or refuse a company that wants to come into our territory.”
Niko Ainusi, Kepala Kampung Demini, Momiwaren, West Papua

“We had no idea. It turns out that the world is changing rapidly, and we communities are the ones who will be affected by this problem.”
Pak Edi, Segamai, Kampar Peninsula, Riau

“These films are the best work in 2010 […] for rural communities to gain awareness about climate change, and why it is so important to protect the forest for their own lives and for the world.”
Thomas Wanly, Central Kalimantan, Indonesia

“The language is simple”; “it covers all the issues”; “it invites us to think for ourselves”.
Community members, West Kalimantan

“Our consciousnesses have been awakened by what we have seen. It is very interesting to see the various opinions from indigenous leaders locally, nationally and internationally. Our environment can be destroyed so we need to ensure that our rights in land are secured to avoid negative impacts from outside interests.”
Pak Solengdipura, Pendaun, West Kalimantan, Indonesia

“Just recently, we watched a film from Indonesia. It showed how the people of Indonesia had been suffering very much because of a company which had come to their place. [...] They said companies like this bring a lot of problems, it would have been better if companies like this had not come to their land. They have lost their medicinal plants and lost the forest resources which women could collect and sell to educate their children. As for employment, the company said they would be given money and so on, but turned to be not true. So they are suffering. So this taught us a big lesson. That these companies that can also come to this, our own area, as they came there in Indonesia.”
Gabriel, Fabe Village, Cameroon.

From NGOs, Indigenous groups and other civil society groups

“This video could be a mirror for us to reflect the journey of struggle of indigenous peoples to revive the spirit of resistance and unity.”
Agus Sutomo, Link-AR Borneo

“LifeMosaic’s film is the best and the most useful oil palm film that I’ve seen. The reasons are that it is based on community voices, that it is simple yet in-depth and that it covers the issues that matter and that are relevant to communities.”
Jefri Saragih, Sawit Watch, Indonesia

“LifeMosaic produced a remarkable video regarding oil palm expansion and villagers’ reactions to it. What is impressive is not only the video but the very strategic way that the video has been disseminated.”
Patricia Shanley, Centre for International Forestry Research, Indonesia

“Seeing this film really brought climate change home to me. I realised for the first time that indigenous peoples all around the world are experiencing the same thing as communities in Indonesia. I realised that the impacts of climate change need to be urgently addressed, not only through the lens of REDD, but also in terms of addressing adaptation.”
Andiko, HuMa (Indonesian association for community-based and environmental legal reform)

“We are using the video 'Fever', in Waspam, Tasba Pri and Mayangna Sauni As… and I have given a copy to each of the community communicators who have committed to screening and analyzing it in various communities. We have been able to really raise awareness and consciousness. These are very good resources… thank you for this work and congratulations! Can you imagine that a Misquito from the Rio Coco saw this as a direct message from indigenous brothers and sisters in Indonesia sent through Tebtebba and CADPI… I found this very touching… for him it was very direct… a clear message straight to his people.”
Dennis Mairena from CADPI (Centre for Indigenous Peoples  Autonomy and Development), Nicaragua

“I have just watched the 'Fever' film and I find it fantastic for empowering local communities to understand fully climate change phenomenon. ABN is a network of individuals and organizations, we work a lot with rural and indigenous communities in 12 African countries and such materials would be very useful to share with partners and communities they work with.”
Simon Mitambo (Coordinator), African Biodoversity Network (ABN), Kenya

"Only informed and empowered citizens can hold their leaders accountable. Leaders who know that their citizens cannot hold them accountable tend to be irresponsible, abuse power and abuse their citizens. They mismanage resources and in the process cause much poverty and suffering. In fighting poverty it is essential to empower communities."
Wangari Maathai