Communities in Raja Empat are shaping their world 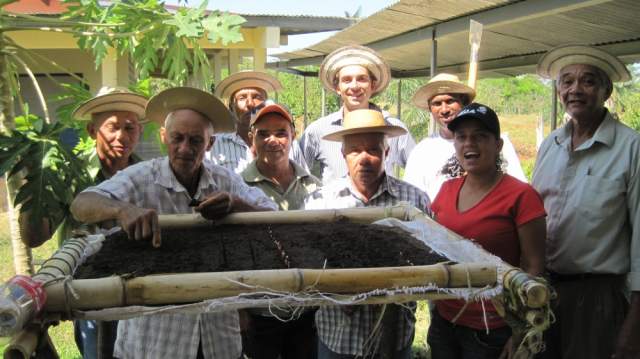 Odielca Solis and other members of APASPE in her community of Los Asientos, Panama, during a training led by the Peace Corps on native tree species propogation

“I was surprised that ELTI could convince so many farmers and ranchers to change their conventional systems to more sustainable practices. People here have been ranching and farming this way for over 300 years.”
Meet Odielca Solis, a self-employed accountant, cattle rancher and small-scale farmer in Panama’s Azuero Peninsula.

The region has lost most of its forest to agriculture and extensive cattle ranching. Today, land users rely on many inputs to yield results. Drought years bring heavy losses. Fires are very common during the five-month dry season. Biodiversity has suffered. Cow manure and agrochemicals contaminate many of the region’s rivers and streams.

Odielca’s interest in implementing more sustainable practices was personal; “I have a young son and I want him to be able to keep farming on my land in the future, without it all being infertile and degraded.”

“I am very proud of the results. My farm’s production has increased. The streams don’t dry up in the summer. You can see the difference. What’s more, our ranching association is recognized as an expert in the region. We have received many visitors interested in replicating what we have achieved.” Odielca Solis

Before ELTI’s Training and Leadership Programs, Odielca had little access to information about silvopastoral, agroforestry or general sustainable agriculture systems: “As one of the few female cattle ranchers in a male-dominated sector, it was very difficult to gain the support to learn about and implement alternative systems,” she says. “ELTI introduced me to the way forests and biodiversity help increase agricultural production. The Leadership Program also helped [many alumni] develop into community leaders, especially with our association (APASPE).”

Today, Odielca serves as the treasurer of APASPE, leads trainings on her farm, and communicates project objectives to other members and during meetings. As an ELTI course exercise, other farmers now visit Odielca’s farm and create restoration plans for the most degraded parts. In addition, course participants learn how and why reforesting long corridors of trees between existing riparian forests aids biodiversity.

Odielca’s goals have grown with her capacity; “We want to expand APASPE, and I would like to keep improving my farm by converting it all into silvopastoral and agroforestry systems.”