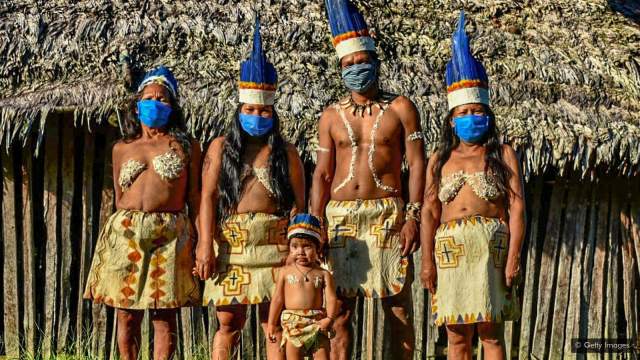 From once having 50,000 members, the Amazon’s Huitoto tribe now has less than 1,000; Covid-19 could threaten the survival of tribes like this (Credit: Getty Images)

When Victoria Tauli-Corpuz stepped off the plane in Geneva in February, it was supposed to be her first stop in a multi-country mission in her role as the United Nations Special Rapporteur on the rights of indigenous peoples. Instead, new – and quickly changing – quarantine rules meant it was her last stop. The rest of the trip was cancelled.

Instead, Tauli-Corpuz flew home to the Philippines to concentrate on Covid-19. The impacts of the novel coronavirus on indigenous peoples, she had realised, “could wipe us off the map”.

Indigenous peoples around the globe tend to be at higher risk from emerging infectious diseases compared to other populations. During the H1N1 pandemic in Canada in 2009, for example, aboriginal Canadians made up 16% of admissions to hospital, despite making up 3.4% of the population.

Covid-19 is no exception. In the US, one in every 2,300 indigenous Americans has died, compared to one in 3,600 white Americans – making them the second most at-risk ethnic category in the US after black Americans. In mid-May, the Navajo Nation, whose reservation spans 27,000 square miles (70,000 sq km) in the south-western US, surpassed New York state for the highest Covid-19 infection rate in the US.

“We have fewer hospitals, doctors, ventilators – everything necessary to survive the crisis,” Tauli-Corpuz said. “Indigenous peoples also have higher rates of pre-existing conditions and poorer nutrition that leave us more susceptible.”

Amazonian indigenous groups are particularly vulnerable to dying from Covid-19 because they often live days away from professional medical help. As of 28 July, the disease had killed 1,108 indigenous people and there had been 27,517 recorded cases, with the majority in Brazil, according to data published by Red Eclesial Panamazonia (Repam). The disease has affected at least 38 indigenous nations in Amazonia.